to post a belly pic but have not yet come around to taking another one.  (AND I HAVE!!!) 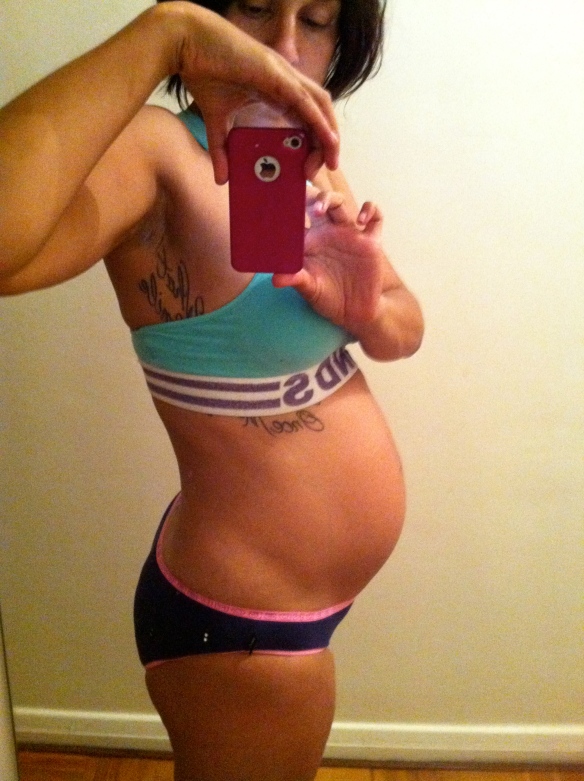 As I said earlier I feel pretty massive and it is only going to get worse. Yesterday was a particularly bad day since I felt that I could barely walk anymore. I am not sure if it was the heat (or the fact that I was just really tired from another long week.  I did manage to finish my last bit of work on Saturday and now have a week of grant writing/preparation to look forward to.  It is probably as dull as it sounds, but it means I get to sit in front of my computer and not be in the lab all day.  Which means I get to procrastinate on the interweb.

I am counting down the days until Y gets here. 2.5 more weeks to wait and time is moving so unbelievably slow!!  Well when it comes to us being together, when I look at time  with my pregnancy it is moving pretty fast.. Just 14 weeks and Bubbles is due.  And I still have not bought anything (we got about a million baby clothes from France and G gave me an old pram) and the main thing we need is a crib. The new house has built ins, no need for a wardrobe and I am planning on using a set of drawers as my changing table.

I am trying to hold off on buying stuff, since we wont be moving for another few weeks and if I go crazy now it just means we need to move more of stuff.  I was planning to just get a trailer, but I am now thinking that it might be handier to get a removal person since I have to get my bed and dining table from the 3rd floor and I will be nearly 30 weeks preggo by then, not really ideal for actually helping with stuff. It will also mean that we can move into our new place earlier (and not wait until the weekend when friends can help), which is what I want more than anything.  I mean I love living with T but I really want to be able to be with Y in our house.. especially if his new jobs starts pretty soon after he arrives.   I want to be able to explore the area with him, this will be my first time living in the inner west and I dont know the area at all.

ages and heaps has been going on!

The first and most important 2 things are that my dear friends L and A had their babies and basically on the same weekend..  I have had the pleasure to meet them both and must admit that I felt a weird kind of jealousy that I still have wait another 3 months before I get to meet Bubbles.  To say that the babies are adorable is an understatement and both L and A totally Rocked their not so easy births (which I must admit did freak me out a little, it really does hurt apparently!)

In other equally important news: Y has a job for when he comes to Sydney!! And while it is part-time I am sure he will be able to find stuff to do on te days/ hours that he is not working.  I am heaps excited and can not wait to have him here with me and Bubbles.

We also have a house that I thought I was going to move in this weekend but hey my progesterone brain got the month wrong so it wont be until mid November, which works out even better since Y will actually be here then.  I was stressing out about having to move and finishing the pile of work I have and buying furniture and dragging  J to every shop every weekend!!  The place is ideally located, about 10 min from my uni and 15 min from station and hospital!

I am big, bigger than big and Bubbles is doing great.. I feel that walking up the hill or climbing stairs is making me a bit puffed, but I do somehow manage to ride my bike and really really enjoy it too!!  Have not yet gone for another swim but will soon.

Work is crazy busy but also really enjoyable since my experiment is working and things are falling into place.  I really do love my job and it is a pleasure to be in the lab and work with the people that I work with.

And that is very  very briefly all that has been happening in the past few weeks!!

It is great being back and unfortunately it is almost over!!

I arrived on Thursday after a pretty long flight.. Dad was in bed when Mum and I got back and after a shower I too went straight to bed. Had a pretty good sleep and surprised dad in the morning!! We compared our bellies and his was about the same size as mine (result of beer and medication).  Y was arriving that afternoon and we were both so excited.. I was of course late at picking him up at the station but we made it home and after having dinner with mum and dad we excused ourselves and went upstairs.  I had already received 3 emails from Jane  and I had no idea what exactly was going on (she was going to email me the sex of Bubbles) so we sat down and opened the first email: and there it was… A GIRL!!! Bubbles is a little girl.. I cried of course just cause I was happy and surprised..   Y had already told me several times that it was going to be girl so he was less surprised.

It sounds ridiculous but I really really wanted a baby girl. I just thought it would be easier, since I only know girl stuff (I am an only child) or at least that is how I feel.. Seeing my friends with boys especially the older ones I see that it obviously is awesome too!  And I  guess that once our daughter turns into a teen I am in for one hell of a ride.

After finding out the sex we decided on a name in about 5 min.  This is the one thing we are keeping a surprise.. but that was one of the easiest decisions we made.. we saw it and loved it and then felt silly that we decided it so quickly and said that we would still look for other names.. it has now been 2 weeks and there is no way that I am changing my mind. Our final argument is a middle name, I really want one, Y thinks it is not at all necessary.

After the first weekend in holland we went to Tours, I was a little concerned having to tell Y’s mum that we decided on moving to Sydney but that all went really well. Her main concern was his PhD and I totally agreed with her on that, by no means do I want him not to do his PhD and neither do my parents for that matter.

After a very quick visit to France we were back on the train to Holland and for another few days with my parents a visit to Amsterdam and some catching up with friends. Then before I knew it, it was time to say good bye to Y again.  I dropped him to the station and was pretty sad, it never gets easy.. My tears quickly dried when I got to the car and saw the parking officer issuing me with a parking fine!

Spent another 3 days with my mum and dad and thoroughly enjoyed being able to just be with them.. saw some more friends and then it was Saturday and I was leaving..

Will tell you all about my adventure getting back to Sydney the next time!